2015 was not a particularly great year. Yes, the portfolio ended the year with a positive outcome (2.98%), but that was mostly because the euro became weaker versus the dollar (-10.27%). Skagen Global was sold during the year (see this article).

What was great about 2015 (and of January 2016) was that the stock price of Berkshire Hathaway declined a bit. It became really attractive as the price is approximately at the level Buffett might consider to buy it back (under 1.2 book value per share). Berkshire is worth, according to him (and I can only agree), considerably more than that. Buying share at something like 1.25 times book value is therefore quite sensible. So, as of the beginning of January I put all my available cash into the B-shares. The current portfolio differs thus with the one shown beneath.

The only thing I am hoping now for is that the stock market continues to perform lousy. That way Berkshire can put the cash they hold and generate to use, either by buying back stocks or by buying companies. We’ll see. 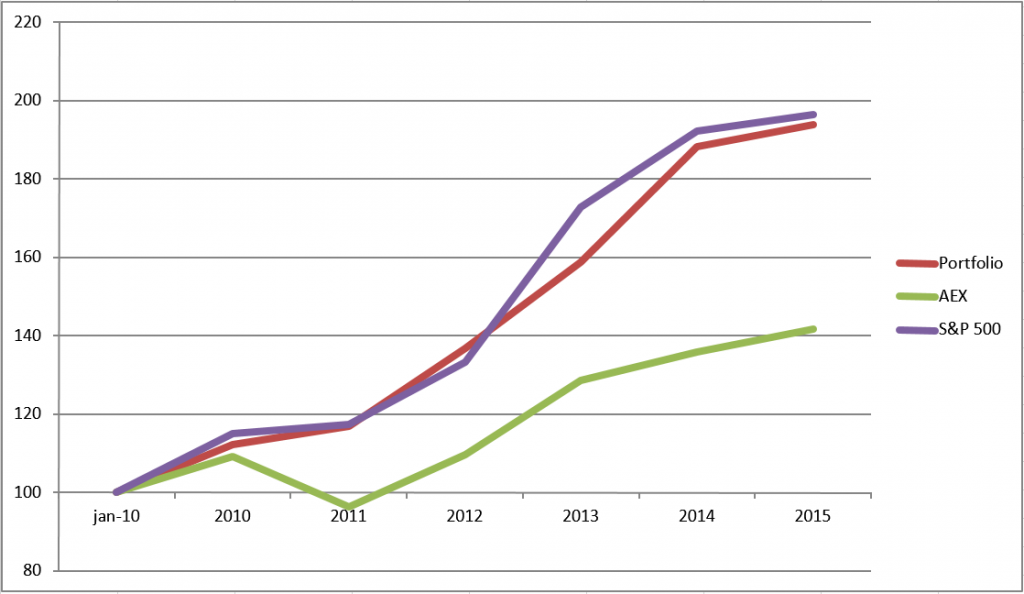 It seems like we could have just as well closed the stock market for nine months. Sure, we would have missed a lot of volatility, but the end result would have been about the same. The performance of my portfolio, as well as of the AEX index, was within +/- 1% of the start of this year. What did change however, was the composition of my portfolio (something that couldn’t have been achieved without an open market, of course). Skagen Global continued to disappoint, so I got rid of it. The result of this fund was a 12,5% profit in 14 months.

Most of the proceeds of this sale was kept in cash. Only a fraction is reinvested in iShares Core MSCI World UCITS ETF (quite a mouthful).  This ETF tracks the MSCI World index. Trackers are extremely suitable for investors who just don’t have the time to study companies or don’t have the capacity to do so. They are very cheap compared to mutual funds, and although they don’t beat the index (neither do most of the mutual funds), they will consistently come close to the returns of the index they follow. One thing I made sure of was that the ETF I invested in really owns the stocks and doesn’t replicate the index returns using derivatives. By using derivatives an ETF could bring risks you don’t want to have or don’t even realize you have.

END_OF_DOCUMENT_TOKEN_TO_BE_REPLACED

This is going to be a short post as there is not a lot to talk about that was not already told in the review from the first half of 2014. Because of a lack of time, still caused by my studies, am I unable to invest the way I did before. The transactions of the first half of 2014 reflect this as I had to adjust. Nevertheless did my portfolio perform quite well, especially in the second half of 2014. The performance was driven by my stake in Berkshire Hathaway (BRK-B) as the stock increased ±27%. This increase in price was more than the increase in intrinsic value of the company. Although it was still undervalued at the beginning of 2014, it is less so now. We have to wait for the annual report to be able to determine the approximate value of the company. I can comfortably say, though, that Berkshire is not yet priced at an unreasonable high value. Therefore I expect to keep the stock in my portfolio in the foreseeable future.

END_OF_DOCUMENT_TOKEN_TO_BE_REPLACED

During the last four years I invested my money according to the value philosophy. This was pretty rewarding as the returns were an average 12.26% per year, totaling 58.8% from beginning 2010 to the end of 2013. Unfortunately is value investing a time consuming job. If you want to do it right, you should put a lot of time into reading about companies. Not only consistently reading about the companies you are already invested in, but also reading about their competitors or about companies you might want to invest in at a later stage. This, however, has become impossible for me to do as I entered the last stages of my studies law and business economics. Therefore I sold most positions.